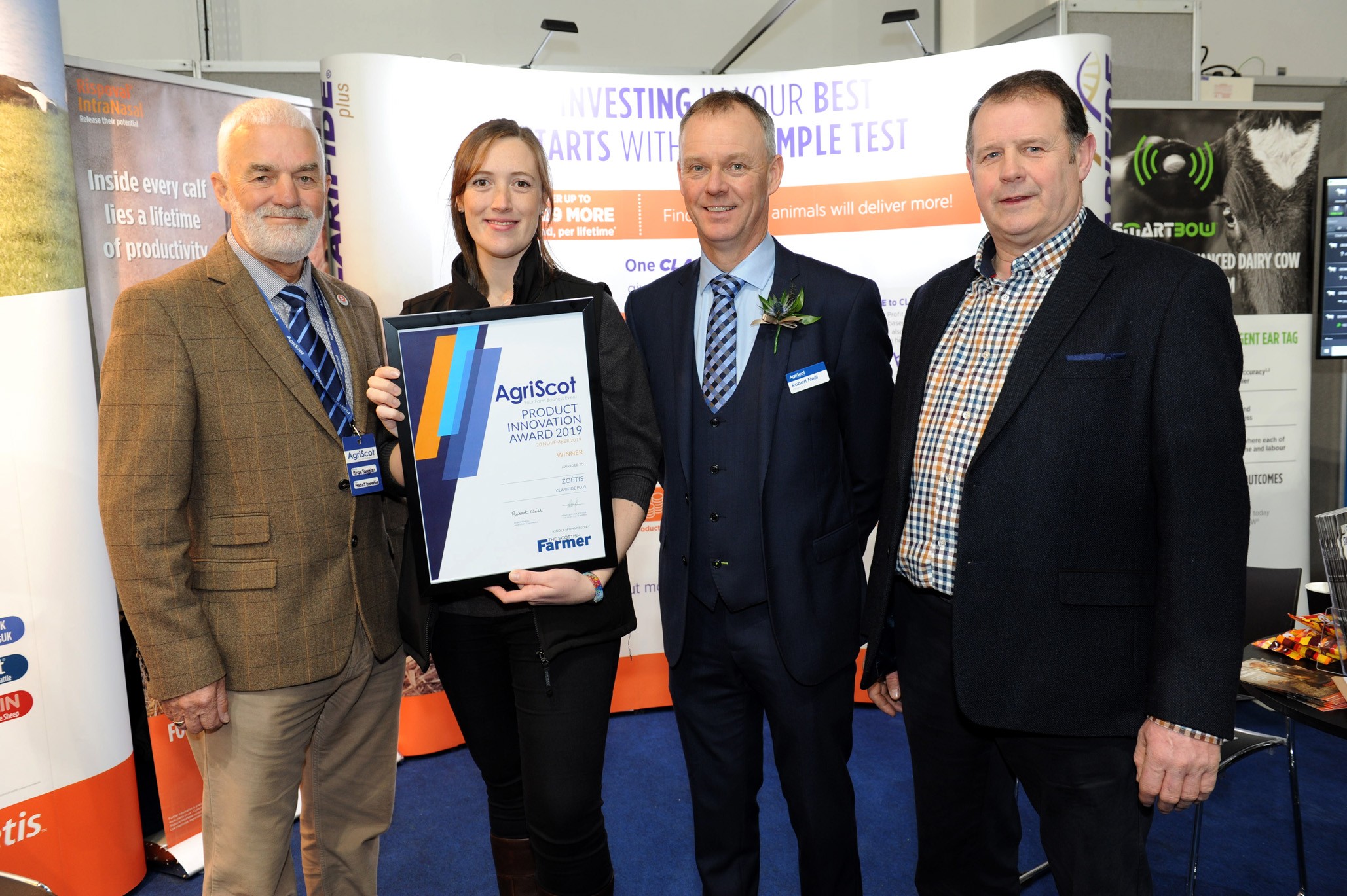 The AgriScot Product Innovation Award is designed to recognise and reward commercial potential, creativity and innovation.

Meeting emerging or existing demand for new or developed products and pushing technological or mechanical boundaries, winners each year need to demonstrate ingenuity and uniqueness as well as business potential.

An exciting new product which allows farmers to graze their livestock within set areas, but without the need for traditional fencing, has won the top prize at this year’s AgriScot Innovation Awards.

This was Nofence Grazing Technology’s GPS-controlled head collars for cattle, sheep and goats, which allow users to digitally set grazing areas, with an audible signal acting as a the first ‘fence’ and a small electric pulse as the final deterrent to keep them within those boundaries.

It consists of a solar-powered GPS collar which mark the digital ‘fields’ farmers set for any given area via a web portal run by the company and an easy-to-use app on your mobile phone network. It relies on the GNSS positioning system for accuracy (GPS and GLONASS satellites) but good mobile coverage is also a plus point for handy control.

This means that the fence can be easily adjusted or moved, giving animals access to new areas and fresh pastures. Nofence also lets users track their animals’ movements and alerts owners if anything untoward happens.

As well as being used in conservation and habitat grazing projects, the technology also has a role to play in managed grazing systems which means that messy job of shifting the electric fend in strip grazing situations, for example, can be eliminated.

The technology was developed in Norway by a hill farmer who wanted to make use of grazing areas, but without the added cost of fencing. From a standing start 10 years ago, there are now 35,000 collars in use around the world, with 3500 of these in the UK, where the company now has its only base outside its home country.

With a similar terrain to Norway, Scotland is seen as an ideal place where the Nofence technology can be utilised. It costs £239 per head collar for cattle, or £149 for sheep and goats, and is already being successfully used for conservation grazing by the likes of RSPB and other wildlife trusts, plus it’s ideal for common grazing or near dangerous cliffs.

This system, felt the judging panel, could have wide-ranging applications ranging from conservation grazing in the likes of National Parks and nature reserves, to encouraging all-arable farmers to consider including livestock in their rotations once again.

The judging panel was made up of well-known Borders’ farmer, John Elliot jnr; Royal Highland Agricultural Society of Scotland CEO, Alan Laidlaw; and Ken Fletcher, editor of The Scottish Farmer.

Chair of the panel, Ken Fletcher, said: “Innovation is the foundation of continuing success for agriculture and if the entries for this year’s AgriScot Innovation Awards are anything to go by, then there’s a solid future ahead for Scottish farming.

“Scotland’s farmers have a reputation for coming up with and implementing new ideas and technology – and they have to be, given the geography and climate we have to contend with. That means it’s great to see so many new products coming through yet again for these awards.”

The judges also felt that two other companies entered machines and technology that offer significant benefits to farming businesses.

First of those was Merlo UK for its e-Worker, an all-electric telehandler which packs a punch from its 90KW electric motor, capable of an eight-hour working day from an overnight charge of its lead acid battery. The telescopic boom offers a maximum lift height of 4.80 metres with up to 2.5 tonnes of lift.

Also highly commended was iLivestock’s eWeigh system which boasts the features of advanced weigh indicators at an entry level price.

Weights and records are saved immediately and there is no need to plug the device in to a computer to upload the data. This system was developed, tested and built in Scotland.

The AgriScot Innovation Awards were sponsored by The Scottish Farmer, with the winner receiving £1000 towards advertising in the newspaper.

The winner this year was Divsey’s Deosan HH+ hoofcare product, which is a more environmentally friendly and easier to dispose of product than traditional foot bath formulations.

The award was presented online to David Jackson, the company’s Scottish and Cumbrian account manager, who told The Scottish Farmer: “We were delighted to win the competition again and it shows that our strategy of producing novel ways of helping health and hygiene on the farm, yet with products that are kinder to the environment, is paying off.

“Lameness is one of the biggest animal welfare challenges dairy farmers face and has been for over 20 years. At any one time, as many as 20-25% of a dairy herd can be lame with losses to lameness averaging 2% of milk revenue.

“Deosan HH+ directly improves the strength and structure of the hoof without masking the symptoms of lameness.”

“Walk-through footbaths designed to limit bacterial infection and to harden the hooves have been the standard approach to reducing lameness. However, until now the available solutions employed have not been sustainable,” he said.

“The Deosan HH+ formulation restores hoof hardness without damaging the earth, your animals or the value of milk. It boosts natural prevention from the use of a strong mineral acid that supports the reversal of the hoof degradation process, optimising hoof hardness in a safe way that does not trick the animal into thinking they are free from pain.”

The product is100% water-soluble, which significantly reduces its environmental impact.

The judging panel consisted of Brian Sangster, representing the British Agricultural and Garden Machinery Association; Alistair Kingan, the winner of the 2019 AgriScot Scotch Beef Farmer of the Year award; and Ken Fletcher, editor of The Scottish Farmer.

A joint statement for the panel said: “Standing still is not an option for any business and it is competitions like this that pump life and energy into the industry. The winning product ticked a few boxes for us, not the least of which is that it is an everyday use product that fulfils two aims – it is effective in ‘doing what it says on the tin’ and it is also much less toxic and easier to dispose of than current products.”

The winner received £1000-worth of free advertising in The Scottish Farmer.

In what, for the judges, was another extremely competitive year, CLARIFIDE Plus has beaten nine other entries to be crowned winner.

After much deliberation, the winner was announced as CLARIFIDE PLUS from Zoetis. CLARIFIDE Plus incorporates health and wellness traits in addition to the production traits delivered by standard genomic testing, helping to predict a heifer’s potential and their ability to reach it. As wellness traits offer the opportunity to better manage disease and increase on-farm profitability, CLARIFIDE PLUS predictions translate to real performance differences. On average, cows in the top 25% for the genetic predictions for each health trait were over twice as likely to stay healthy as those in the bottom 25%.

AHV Agri-Pharma, a new innovative solution in the fight against pathogenic bacteria in dairy cows, from AHV, and the Pottinger Impress 125FC Baler Wrapper Combination, the completely new range of Impress round balers and baler wrappers from Pottinger, both won this year’s Highly Commended accolades.

Gemma Allison, Account Manager at Zoetis, said of their win:

“We’re delighted to have won the Innovation Award today at AgriScot! A lot of hard work has gone into CLARIFIDE Plus so we’re over the moon. Heifer genomics is still relatively new, and the difference CLARIFIDE Plus can make in identifying wellness traits means farmers can be more precise in ensuring the productivity of their dairy herds in the future.”

After a year in which the judges of the AgriScot Product Innovation Award have said that their task has been the toughest since the award began, a winner has been crowned.

Emphasising the environmental theme shown by a majority of the shortlisted companies, the title winner this year is a 100% natural and sustainable teat disinfectant for use both before and after milking, delivering benefit to both farmer and consumer.

The AgriScot Product Innovation Award is designed to encourage new products, innovation, forward thinking and potential business benefit, all of which can be seen in abundance among the 250 trade stands at the event.

The judges noted that a majority of shortlisted businesses presented products which help to the farming sector to improve its environmental impact even further. The winner is Diversey UK with their Deosan Triathlon which kills 99.999% of bacteria after 30 seconds. Out performing traditional chemicals by returning more moisture to the teat and removing dead skins cells, the product performs two crucial rolls by supporting farming’s needs to achieve highest quality of milk and supporting the consumer need to have a more natural milk product.

David Hamilton and Brian Sangster, two of the judges of the Product Innovation Award, said:

“This was truly a tough job for us. Getting down to the top three and then selecting a winner was virtually impossible. We noticed an environmental theme this year with at least 6 of the 10 finalists putting forward a product which helps the farming industry to farm in a more environmentally sustainable way. We are delighted to be awarding three businesses with such potential.”

“As a business, our focus is always on food safety and so to develop this product fits entirely within our ethos. It is 100% biodegradable, leaving no residue and so meets the needs of both farmer and consumer. We are delighted with this win, which will strengthen our reputation and further boost our credibility. Farmer feedback has been very positive but further recognition is always welcome.”

Two products were awarded Highly Commended in the award. Kverneland Siloking e Truck is a self-propelled vertical feeder mixer which is 100% electric. The machine can be used for mixing, transporting and presenting feed with very low operational costs (no diesel and the possibility to use renewable energy). The other Highly Commended was the Soltropy System XM10 which is a modular thermal panel that does not require antifreeze. It converts the suns energy into free heat by directing heating water and can freeze without damage.

An easy to use phone app which records essential livestock records, led the Product Innovation Award.

Now a regular fixture on the AgriScot Awards programme, which rewards and encourages forward-thinking new products, this year’s title went to the team from Herdwatch. Their farm management app allows farmers to easily record data on smartphones and it beat nine other entries to be crowned winner.

The AgriScot Product Innovation Award looks at the potential business benefit delivered by entrants, and shortlisted companies were scrutinised by a three-strong judging panel – Robert Parker (the 2016 Scotch Beef Farmer of the Year) and Sandy Mitchell (the 2015 Scottish Dairy Farm of the Year) and Ken Fletcher, editor of the Scottish Farmer (AgriScot’s Media Partner).

Their choice, Herdwatch is an app which can work with smartphones, tablets or PC, anytime, anywhere event without internet connectivity. Up to five devices can be used under the same licence, which costs £130 per year by subscription. It is BCMS and Red Tractor compliant and enables the recording of animal welfare and traceability events in order to maintain compliance with relevant legislation.

An automated lameness detection add-on to the CowAlert pedometer based system from Ice Robotics and a pto driven hot water pressure washer from Lambert and Dyson were awarded Highly Commended accolades.