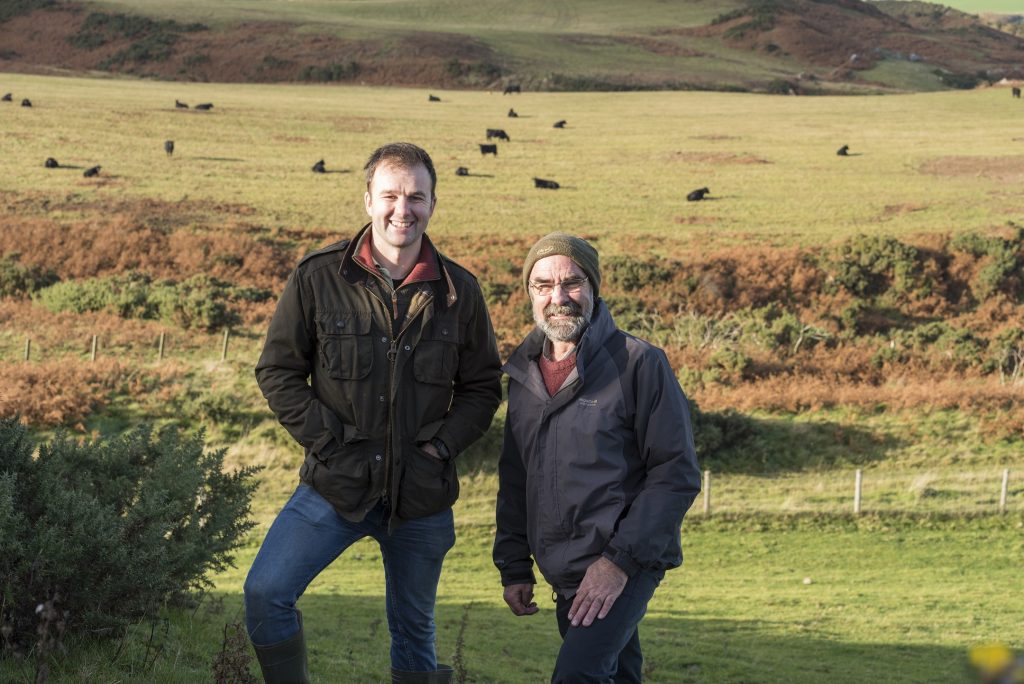 The coveted title of AgriScot Scotch Beef Farm of the Year was awarded today (Wednesday 21st November) to an East Lothian farm.

Bielgrange near Dunbar, run by Niall Jeffrey in partnership with his father Angus, was revealed as the recipient of the award during a presentation in the main ring at the AgriScot event in Edinburgh.

Both herds calve from March to May in a mixture of indoor and outdoor accommodation and are then moved to grazing from mid-April when they enter a rotational grazing system for the first half of the summer to try and utilise the grass growth.  Calves are EID tagged at birth and weaned outside before being housed in an outside corral and wintered on straw, bruised barley, dark grains and sugar beet pulp. They are then grazed from April to July before being housed from August to finish around 16-18 months.

The aim of the Scotch Beef Farm of the Year Award, which is run by AgriScot and Quality Meat Scotland (QMS) and sponsored by Thorntons Solicitors, is to showcase excellence in the production of cattle in Scotland and raise the profile of the dedication and stock management skills behind the production of Scotch Beef PGI.

Following the announcement, Niall Jeffrey was keen to praise the efforts of the team, including three members of staff. He said: “We were honoured just to be nominated for the Scotch Beef Farm of the Year award but to become a finalist, and then go on to win, makes me even more proud of our team.”

As part of the award prize, Mr Jeffrey received a £500 cheque as well as a £250 voucher to celebrate the farms success at a Scotch Beef Club restaurant. The members of the club, run by QMS, are committed to serving top quality Scotch Beef PGI.

The other two finalists in this year’s award were Poldean near Moffat, run by husband and wife team Alisdair and Emma Davidson, and Midtown of Glass near Huntly, run by Gary and Angela Christie with help from their son Adam.

Fergus Ewing, Cabinet Secretary for Rural Minister for Rural Economy, extended his congratulations to Niall Jeffrey and the other finalist farms.

He said: “This is a tremendous effort by Niall and Angus Jeffrey, and I extend my congratulations to them on being named Scotch Beef Farm of the Year. The competition this year was particularly good, as all three farms are excellent examples of the best of our beef sector, and I wish them all every success in the future.”

The assessors for the award this year were Robert Neill, AgriScot Chairman, Doug Bell, Director of Industry Development at QMS, and Robert Fleming from Castle Sinniness, AgriScot Scotch Beef Farm of the Year 2017.

Over the last two weeks the team of assessors visited each of the finalist farms to gauge the passion and enthusiasm of the farmer, and family and staff where relevant, to efficiently produce high quality animals.

Robert Fleming was quick to praise all three businesses. He said: “The finalists are all excellent examples of Scotch Beef production. They each have very different systems but all share a common focus on ensuring their businesses return a profit.”

With regard to Bielgrange, Robert Neill commented: “Understanding their opportunities with location and other enterprises in the farming business has led the Jeffrey’s to develop a beef enterprise that not only compliments their overall system but produces highly sought-after prime cattle. Utilising collaboration and technology to maximise cattle performance and keep a firm control of costs.”

Douglas Bell added: “It was a real pleasure to visit all three farms and to meet farmers who are focused on making the very best of the resources they have.”

Kenneth Mackay, partner in the Land and Rural Business team at Thorntons Solicitors, said: “We are delighted to sponsor the AgriScot Scotch Beef Farm of the Year award; it is a wonderful way to celebrate the fantastic beef industry we have in Scotland. Many congratulations to the Jeffrey’s on their success this year.”

All farms producing cattle destined to be used for meat sold under the Scotch Beef PGI label – from breeders through to finishers – were eligible to apply for the award and required to be members of QMS’s quality assurance scheme.