AYRSHIRE FARM IS CREAM OF THE CROP 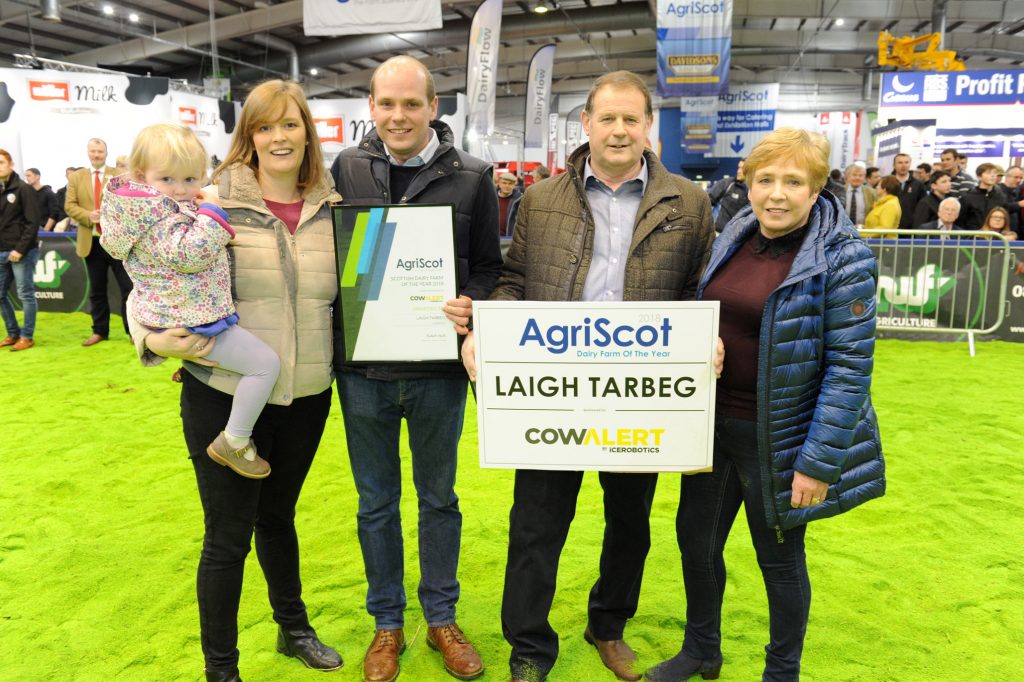 An East Ayrshire family run dairy farm has been awarded the prestigious Scottish Dairy Farm of the Year 2018 title.

The award is part of a series of farm of the year awards presented at AgriScot, the farm business event, held at Ingliston, Edinburgh on 21st November.

Laigh Tarbeg farm at Cumnock, which is owned and operated by the Alistair and Hugh Watson and family, was awarded the dairy farm of the year title after seeing off stiff competition from 2 other finalist farms.

Convenor of the award, and AgriScot Director, Gilmour Lawrie, himself an award-winning dairy farmer commented:

“Laigh Tarbeg farm, and its resident herd of dairy cows, are a credit to the Watson family and their staff.”

“I visited the farm alongside the 2 independent assessors, and we were all seriously impressed. Firstly, and most importantly on any dairy farm, are the cows. We saw healthy, contented cows on all 3 finalist farms and this was certainly evident at Laigh Tarbeg.”

“The implementation of new technology and innovation was what made Laigh Tarbeg really stand out from the others.”

“An acute shortage of skilled, willing labour is being felt across all sectors of agriculture and this is only likely to get worse. Laigh Tarbeg is a case study in how innovative technology, such as robotic milking, feeders and shed scrapers, can be used to take the drudgery out of routine chores and free up valuable labour for more lucrative responsibilities whilst also helping to achieve a better work/life balance.”

“We were also impressed by the breeding and replacement policy at Laigh Tarbeg. Rather than breed replacements on-farm, the Watson’s buy in their heifers freshly calved. With no need to breed dairy animals, this then means that cows can be inseminated with beef semen to produce higher value beef animals for sale.”

“Ultimately this policy also allows the Laigh Tarbeg team to concentrate on looking after their cows and producing milk, without the hassle of rearing and running replacements.”

“We’re obviously delighted to win the SDFOTY Award, especially because it reflects all Alistair’s hard work. There were a number of good dairy units throughout Scotland not nominated, so we were pleased not only to be nominated, but to have won.”

“Enthusiasm from Young Farmers in Scotland is second to none, as is the tech and cowman-ship within the industry, so standing here today with the prize is a great honour.”

The Scottish Dairy Farm of the Year award is sponsored by CowAlert, the fertility, health and welfare monitoring system for dairy cows developed by Edinburgh based animal technologists, Ice Robotics.

“We’re pleased to once again sponsor this award, and think the results speak for themselves. Congratulations to the Watsons on being named this year’s AgriScot Scottish Dairy Farm of the Year.”

The AgriScot farm of the year awards aim to showcase best practice and innovative thinking to the wider industry, as Gilmour Lawrie concluded:

“We tweaked the Scottish Dairy Farm of the Year award this year, to run it in the same nomination led format as our other awards.”

“I am delighted that the result was 3 finalist farms, and ultimately the award recipient, who are exceptional examples of the best of Scottish dairying.”

“Laigh Tarbeg can stand proudly alongside our previous Scottish Dairy Farm of the Year title holders as a beacon of best practice.”